Finding the Greatest Love of All at Harlem United

On most days, you’ll find Brian West behind a desk at Harlem United in a plain shirt and slacks. On others, he’s performing on stage as Cee Cee Leone, his renowned drag persona, in a floor-length, black and gold gown, complete with a ruby-red bob, dangly gold earrings, and a matching necklace.

Cee Cee comes to life a few days a year at Harlem United’s client shows. But the rest of the time, Brian is putting in long hours as one of Harlem United’s most engaged and active clients.

“Harlem United gives me an opportunity to step up, be a leader, support the clients and be there for them, and try to be a hand when they need a hand to hold,” he says. 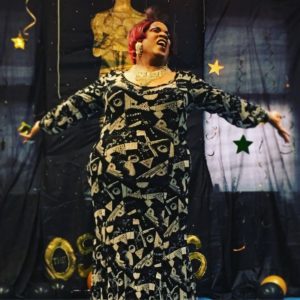 Brian came to Harlem United in 2013, just after he moved to New York City from Washington, D.C. to heal from trauma back home. He was facing unemployment, alcohol addiction, HIV, and issues with anger management, as well as recovering from a domestic violence incident. “I was in trouble, and I wasn’t really worried about being in trouble because I was mad at the world, I was mad at everything,” he says.

After dealing with one toxic relationship after another back home, Brian says that he was stuck in a pattern of putting the needs of everyone around him before his own. Harlem United inspired him to break that habit.

“They asked me what my New Year’s resolution was, and I told them, ‘Well, I’m going to have a love affair with myself,’” he says with a smile. “I was like, ‘Yeah, it sounds a little crazy!’ I’m going to learn how to love me for a change.”

For Brian, learning to love himself began with taking charge of his health. He went to group sessions to work on his anger issues. His case workers inspired him to take his HIV care regimen more seriously and follow through on making his doctor’s appointments. Before too long, other clients were turning to him for help and guidance.

Brian takes his role as a client advocate seriously — at Harlem United, client needs and considerations come first. Brian is happy to both advocate for clients and help them conquer their own challenges.

“My mother always told me that whatever I was going to be, I needed to be the best at it,” Brian says. “I’m one of those people where, if you need help, I will find you some help. When new clients come in, I always introduce myself and ask if they need help, and if I can’t give them an answer, I’ll find out for them.”

It’s been a long journey, but Harlem United is now Brian’s home — whether he’s onstage as Cee Cee or in a consumer advisory board meeting.

“I felt like I was in a black hole before I got to Harlem United, and I got here and there was a whole new energy, a whole new me, a side of myself I never knew about,” he says. “When you’re at your weakest point, that’s when you can do your greatest work.”