Did you know that since new medications became available in 2014, Harlem United has cured over 50 clients living with Hepatitis C? Yet according to Dr. Vera Antonios, Harlem United’s Director of Adult Medicine, many clients are repeatedly denied access to these life-saving medications by their health insurance providers: 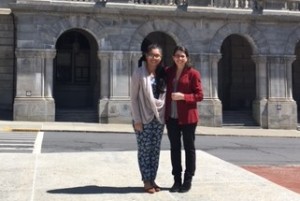 Cinthia Castro and Dr. Vera Antonios in front of the NY State Capitol

Our biggest challenge is procuring authorization for the medication from insurance providers. The majority of our clients are enrolled in New York State Medicaid managed care plans. Some insurance plans continue to deny clients treatment despite several appeals. Some clients may never receive the medication at all until they switch to another plan.

This is why on April 27th Dr. Antonios testified before the New York State Medicaid Drug Utilization Review Board, calling for universal access to Hepatitis C medications for all New Yorkers, regardless of whether they have public or private insurance.

Dr. Antonios’ testimony was preceded by an announcement on April 26th by New York State Attorney General Eric Schneiderman of a settlement with several insurance providers, requiring them to cover Hepatitis C medications. In a statement released to the press, Harlem United CEO Jacqui Kilmer praised A.G. Schneiderman for this historic settlement:

All New Yorkers, regardless of socioeconomic status or whether they have public or private health insurance, should have immediate access to medications that can cure their Hepatitis C infection. Immediate treatment not only reduces health care costs in the long run and prevents the spread of new infections, but also is simply the right thing to do.

According to epidemiological data released in 2013, over 146,000 New York City residents were estimated to have chronic Hepatitis C infection. Up to 50 percent are unaware that they are infected, and most do not experience symptoms until 10 to 30 years after infection.

Hepatitis C is transmitted by exposure to infected blood, primarily through injection drug use, as well as through sexual contact. While new medications can cure up to 90 percent of those infected with Hepatitis C, costs range from $84,000 to $189,000 per person for a typical course of treatment. However, a growing body of research indicates that the lifetime savings resulting from treatment far outweigh the costs. For example, the cost of a liver transplant for those with advanced Hepatitis C disease is approximately $600,000 per person.

Learn more about Harlem United’s advocacy and what you can do to help by joining our Advocacy Network.