Did you vote in the last presidential election? If not, you’re not alone.

Of the approximately 215 million eligible voters in 2012, about 82 million (~38%) did not vote in the election. Research on why people don’t vote reveals a variety of factors.

A survey of 1,170 nonvoters found that 28% were not registered — the top response given for not voting. About 25% reported a combination of logistical reasons for not voting, including that they didn’t have the time, were working, traveling, or were sick.

While some of these may seem like excuses, fact is it could be a lot easier to vote in the United States.

Of those who are not registered, the majority of nonvoters face a combinations of barriers to registration. These include not meeting deadlines (15%), having a permanent illness or disability (6%), not knowing how to register (4%), and many other factors. Several million are unable to vote because of felony convictions or state residency requirements. On the other hand, less than half cite lack of interest as their reason for not voting. It’s not about apathy; it’s about access.

Voting in the U.S. vs. Other Nations

It’s not easy to vote in the U.S. compared to many other nations, where registration can occur on the same day as the election, election days are held on weekends or holidays, or where citizens can even vote by Internet.

These are among the reasons why, according to recent analysis by the Pew Research Center, the U.S. ranks 27th in voter turnout among 35 Organisation for Economic Co-operation and Development (OECD) countries, just above Estonia and Slovenia. 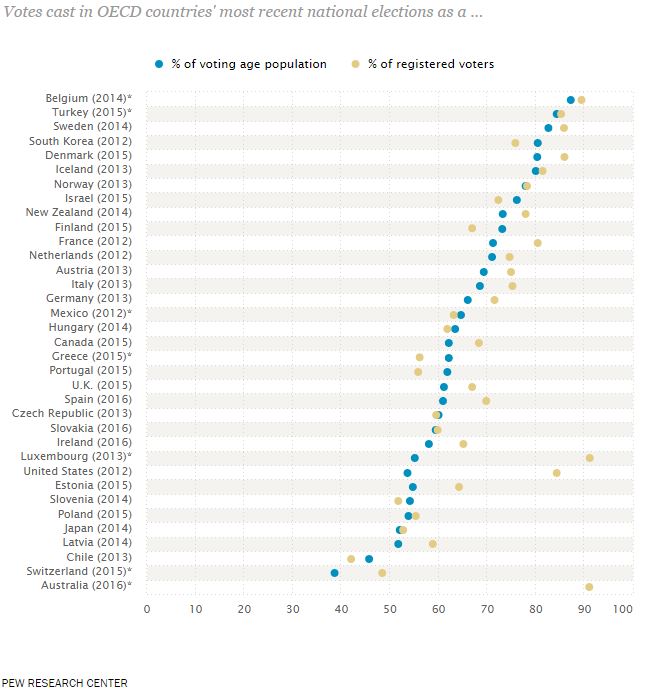 Voting in the U.S. by Race and Ethnicity

When analyzed by race and ethnicity, understanding who doesn’t vote in the U.S. and why is even more important.

The U.S. Census Bureau found that the proportion of Hispanic (of any race), Asian, and Black citizens who vote is significantly lower than the rate of those who are white. Race, ethnicity, and income were also significant factors in whether citizens were registered to vote and actually voted.

These are among the reasons why, this year, Harlem United made unprecedented efforts to register clients and citizens to vote in our neighborhood. We trained staff and volunteers across our service locations and mobile units to help register those who are eligible, particularly those who are living in homeless shelters or who have unstable housing, a group that often believes they can’t vote. And on National Voter Registration Day in September, we held a voter registration drive at the intersection of 125th Street and Lenox Ave., in the heart of Harlem. As a result, we collected and submitted nearly 150 voter registration forms, and we reminded countless others to please vote on Election Day.

We also invested in helping voters across the country understand why they may choose a particular candidate. For example, we secured 40 tickets for clients to watch the first Presidential debate at an event hosted at the historic Apollo Theater in Harlem.

In partnership with Fenway Health, we also created #IssuesThatMatter, an online voter education campaign that 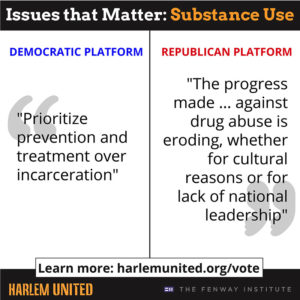 includes detailed analysis of where candidates and their party platforms stand on LGBT equality, HIV/AIDS, healthcare, substance use, mental health, and housing.

Addressing why citizens don’t vote and equipping them with information to help them decide whom to vote for are critical to uplifting policy issues that deeply affect our lives.

These issues are linked to core values shared by Harlem United and millions of people in New York and across the country:

Are we a nation that values the hard-fought right to vote for everyone, or will we continue to leave those affected by racism, ability status, and economic insecurity behind?

Is accessible and affordable health care a human right or something to be controlled by for-profit corporations with the goal of increasing returns for shareholders?

As a nation, are we comfortable with stepping over homeless adults and children on the sidewalks and in parks, or do we value what it means for every person to have safe and affordable housing?

While an increasing number of people die from opioid overdose, prescription or heroin, will we continue to judge addiction and related mental illness solely as a moral failing?

We hope that new data on early voting — and inspiring images of people proudly waiting in line to vote on Election Day across the country — indicate that voter participation and education increased in 2016. At Harlem United, creating one community of hope, health, and healing includes civic empowerment and engagement. Beyond singular votes and election cycles, we’re committed to ensuring that every day, our clients educate and empower themselves and their communities and advocate for policy change that values their health and well-being.